“‘Our communication, she said, is the mightiest gift passed down by our people.  Every word you write and read, every picture you draw, every step you take should be in the service of our people. ‘Don’t be distracted. Be directed.'”

When people ask me how #NCTE18 was, I definitely hesitate before giving a reply.  On the one hand, I have never felt so seen, or so held by my people, so blessed to be able to present sessions that I believe will actually result in some forward movement. I can’t profess to know everything, but I can speak to my experience with ideas and teaching moves that I believe will improve conditions for the most underserved children in the public school system.  It is humbling, and I take the responsibility to represent groups of people very seriously.  So, I go to conventions and put in my two-cents because I still have hope that things, and people–this profession, can change.  Lots of folks think I’m absolutely crazy for holding onto that hope.

I feel so honored to have people from various platforms looking to me as someone who will propel things forward, but it is also somewhat surprising, because I still very much see myself as someone who is, in many ways, still figuring it out as I go.  I’m still learning, too.

Though I love going to NCTE to see, and learn from the people, and I have never seen so many POC at NCTE as I did this year; I also presented five times, went to various sessions and meetings as part of my duties as Secondary Representative-at-Large, and tried to be present for social engagements.  It was a lot.  I read a Twitter thread from N. K. Jemisin that mentions how cons, “eat guests alive,” and I felt that statement in my soul by Sunday morning, and perhaps several times in the days before that!

With that said, a packed house for discussions about disrupting the literary canon, open dialogue about diversity, inclusivity, and anti-racist teaching practices within English education (and NCTE as an organization), and co-presenting one of the most fire sessions I’ve ever witnessed about Culturally Sustaining Pedagogy was a dream come true for me.  Meeting, and getting to connect with authors I have respected and admired for ages  from afar, was a dream come true for me. 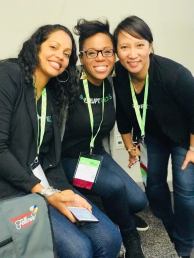 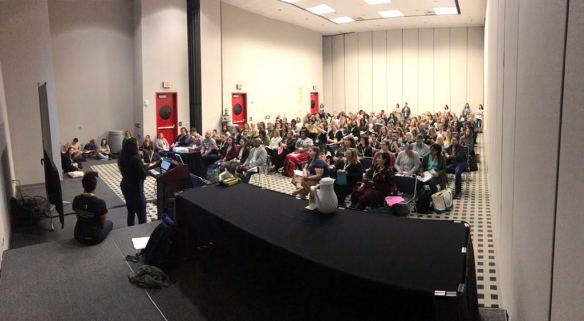 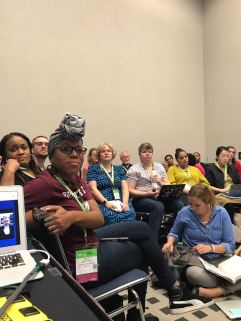 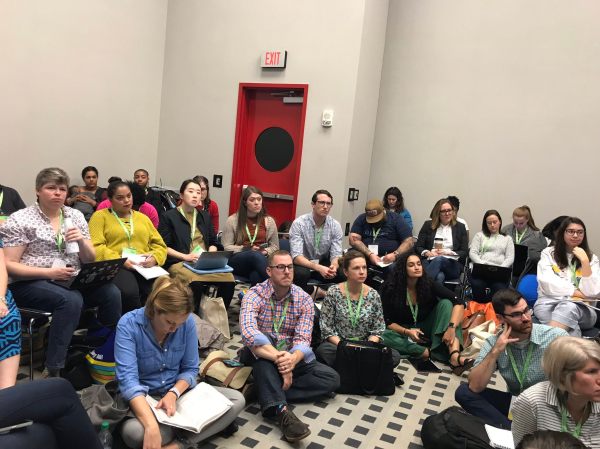 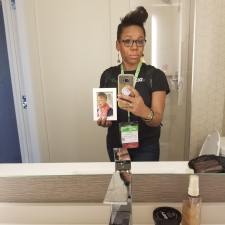 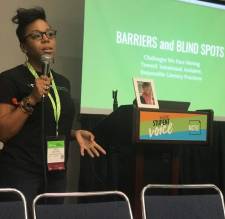 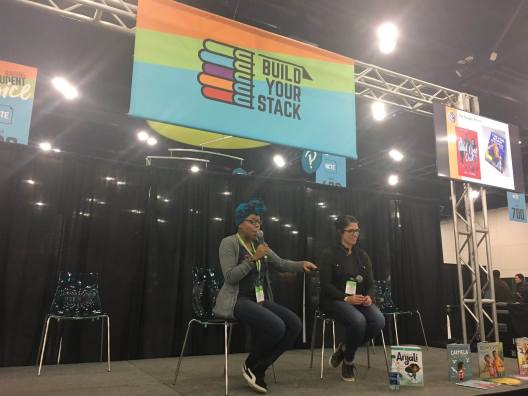 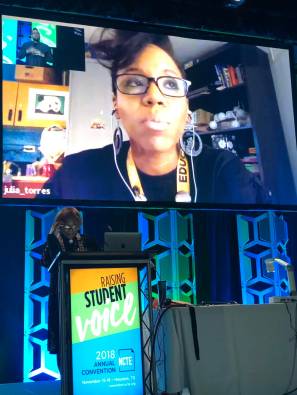 On the other hand, it was also incredibly draining to hear about horrific homophobic statements that were made in a session, appropriation of #BLM by well-meaning (I presume) white women, blatant erasure of Native people and their contributions to Lang arts education, as well as other instances of emotional violence and outright ignorance that prove some folks living in the age of the newly (and performatively woke) may not be as far along as they would like to believe.

It might help if people understood that for those of us who have been historically or consistently underrepresented in the field of education, these “instances” that people would like to see as one-offs or isolated events are anything but that.  It is exhausting to always have to be the one to point that out.  I can’t speak for everybody, but I can speak for myself when I say that whenever I go into spaces where POC are not the majority, I hope things like these will not happen.  Yet, they always do. I feel cut by them, and this is what makes attending educational conferences so exhausting.

Continually bracing yourself for impact is exhausting, so much so that I know many educators belonging to marginalized groups–which is to say those that have experienced continual, and deliberate exclusion from professional conversations in the field of education–who refuse to attend conferences at all.

So, why do I continue to go, you ask?  This year wasn’t the first time that I’ve been in a predominantly white space, quite literally, surviving, while doing my best to be as honest to myself, representative of my community, and supportive of my peers as possible.  This isn’t the first time that, given the fact that over 80% of all educators are white, and female, I had to perform comfort with a lot of the codes of behavior and patterns of interaction that do not feel comfortable, normal, or natural to me.  However, this is the first year that I felt held by the people who were there with me.  I’ll refer you to this blog post by the founder of Educolor and my friend Jose Luís Vilson and these pictures, so you can see/feel the love that was there.  These people sustained–rather than drained–me.  This is how we get by, as we have gotten by–for years.  I operate in these spaces to fulfill the promise that, “Tomorrow, there will be more of us,” (J. Vilson) and to try to give back to those who have invested so much in me. 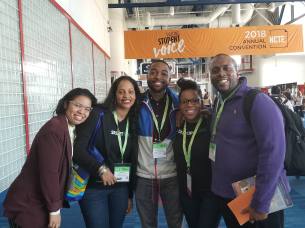 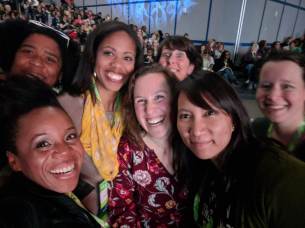 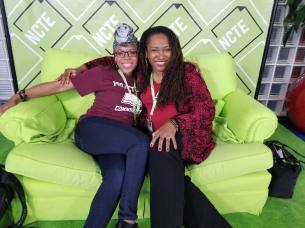 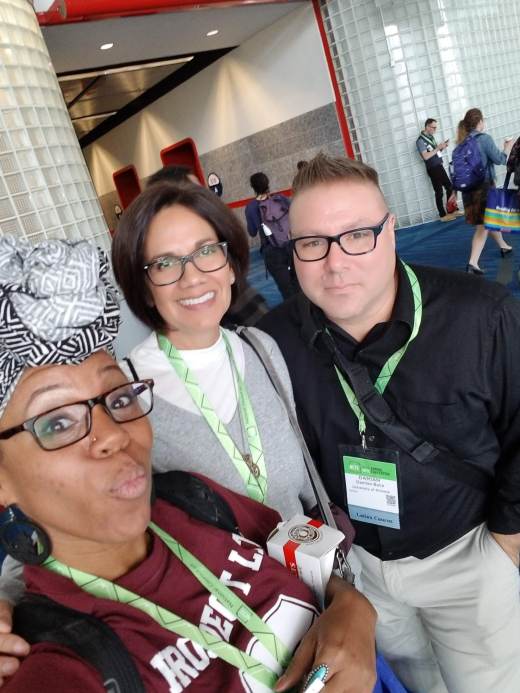 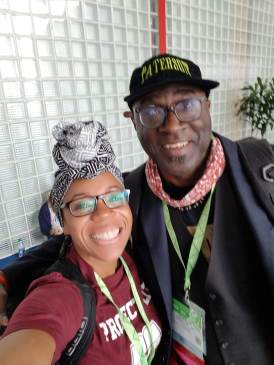 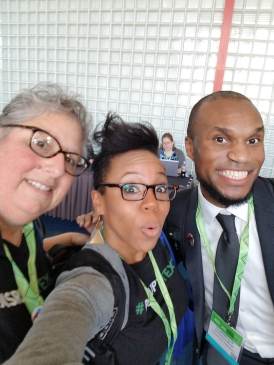 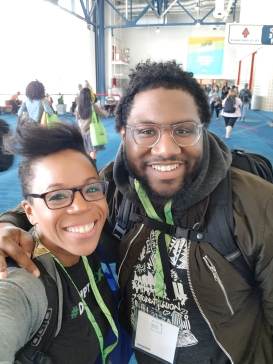 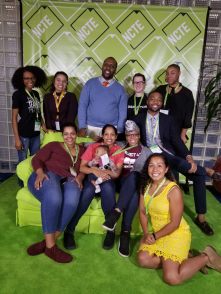 The debate about whether the resistance is best fought from within, or separately and from the outside, is a perpetual one.  Right now, I have the energy to dedicate (mostly unpaid) time and energy to quite a few organizations.  I am extremely grateful for the opportunity to represent my work, my experience, and my community within them.  I value each and every one of the organizations that has stated their belief in me and shown it with a willingness to lift up my voice out of so many others they could have chosen. I’m learning so much along the way.

But, I wrestle with what that means too, and whether I am centering whiteness, rather than the concerns of my people, if I’m working predominantly within organizations most people of color actually doing the work in economically disenfranchised communities have never heard of.   If something about my work results in an LGBTQI or IBPOC student having a better experience in school and perhaps seeing themselves as a future teacher or librarian, then maybe the results are worth the struggle it is taking to get there.  However, as I see it, there is a reason professional organizations rise and fall, and though many of them have existed for decades, we are witnessing the dawn of a new era in professional learning experiences for educators.

I was once told by an editor I greatly respect and admire that, “Everybody great can’t be published.”  I believe that to an extent, though I always return to this notion that until very recently, Iceland published more books per capita than just about anywhere in the world, isn’t that something?

For one thing, behind the scenes of every conference I attend, there are folks from every background going through that painful family remix known as separation and divorce, with close family members dying of terminal illnesses, wrestling with mental or physical health issues–or trying to help close family members deal with them–and some people who are trying to manage all of these situations at once. These are the realest of the real things, which is why conferences, and the organizations that run them would do well to consider the role of mutual care, restoration, and culturally inclusive norms of social interaction if they want to survive.  People should not have to feel they need to recover from the experience of attending an educational conference, yet that is the world too many of us are living in, and it doesn’t have to be that way.

The expectation that folks check their personal lives at the door and go into work mode is not something I have seen in spaces dominated by people of the global majority (Thank you Lorena Germán for that phrase, which I love).  It’s not who you know, what side gigs come your way, or how fiercely you network that matters.  I have seen more than one educator attempt to use their connections as a form of social currency, to assert importance/power over others, which I find really… interesting.  How we treat one another, how we honor each other’s humanity and lived reality in these spaces by listening to people who are there and making room for those who are not, then re-imagining the space to include and support, everyone’s professional learning is what will really transform the future shape of teacher education as we know it.