Last week, I was invited to Anastasis academy to workshop one of my favorite topics in education, Culturally Sustaining Pedagogy.  I’ll have to admit that at first, I was a bit hesitant to go, because of biases I hold about private schools and the types of families who place their kids there.  Even so, when my colleague, who also happens to be a phenomenal educator, and Twitter friend Michelle Baldwin invited me to their conference #Sigma18 to speak and be heard, I took the opportunity–and I’m so glad that I did.  The experience transformed me and had me wrestling with a lot of my own biases which is important work to do. I was reminded that we get nowhere on either side of a divide, by clinging to assumptions or stereotypes we may hold about the “other”.   I have zero regrets about life handing me this reminder.  I needed it. 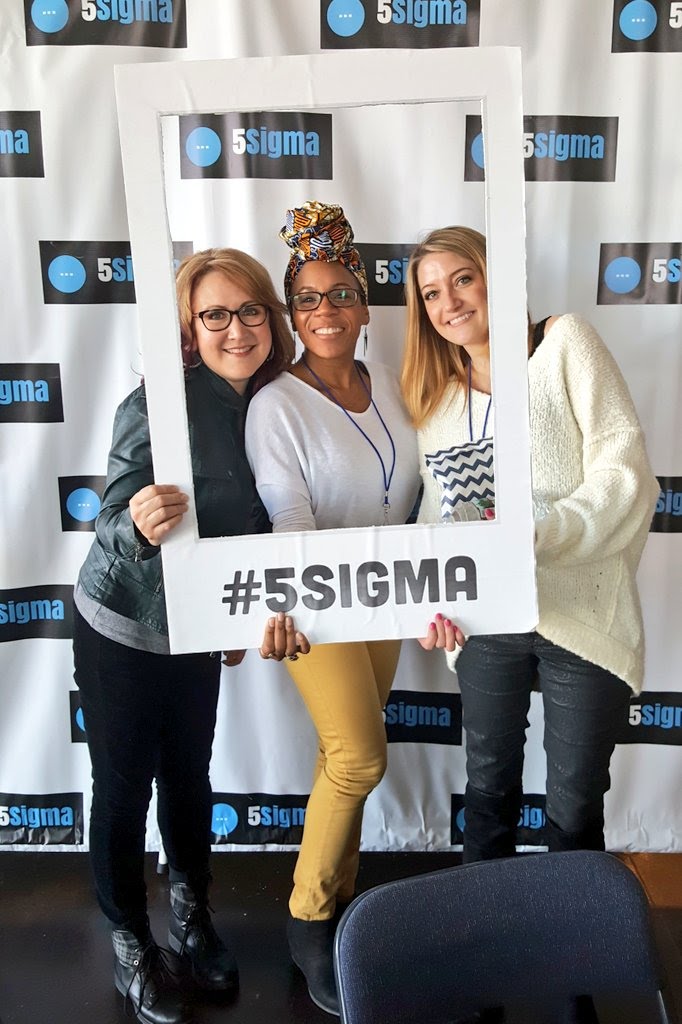 First of all, the truffle mac and cheese for lunch on day one…need I say more?  I’m pretty easy to please.  Feed me well, make me laugh a little bit.  I’m happy.  The #5Sigma18 planning committee knew this.  I commend them for it.

After lunch, we had the opportunity to learn from Barbara Bray who is just everything good.  Her smile, passion for learning, and knowledge are contagious.  By day two of the conference, I knew we would have to work together at some point, because we are most definitely kindred spirits.  She is just the type with whom one can sit and talk about anything, and nothing, for hours.  She has had the richest life as the daughter of court sketch artist Rosalie Ritz and as a resident of Oakland, CA, the game of fighting for equity in education is nothing new to her.  I believe in learning from our elders, and she is a person who in just a short time, taught me so much.  If you don’t know about Barbara, please fix that.  We can all learn something from her brilliance.

I gave my first workshop on day one to a group of people who were not familiar with the works of Bell Hooks, Paulo Freire, Django Paris, or Linda Christensen.  It was really refreshing and fun for me to talk about and read passages from books I consider to be cornerstones of my professional practice.  These works have also been, and continue to be the keys to ongoing development of my consciousness as one who educates for liberation and the dismantling of oppressive systems. Watching people get excited about works that mean so much to me was a joy I didn’t expect, but will never forget.  The thinking below is just a tiny portion of all the good dialogue that went on during workshop one.

What can I say about day two? The first thing that comes to mind is that it began with a donut wall.  That’s right, a wall of donuts–that you could eat from.  Creativity, imagination, sustainability.  Three words that for me characterized day two.

After giving my Ignite Denver 28 speech, I got to hear from Nicholas Provenzano.  He kept me laughing for almost a solid hour.  The whole time, all I could think was, if he’s that funny in class, I don’t know why anyone would ever want to have another teacher.  He impressed me with his conversation about “Makerspaces” and kids doing interpretive dances to show mastery of Language Arts concepts.  He also impressed the audience with the reminder of how important “failure” is along the road to learning.  In a nutshell, I felt inspired to help my students remember why anybody learns–for the sake of curiosity–and to always find ways to bring it back to that.

After the morning, I did another CSP workshop, and then participated in a panel about the evolution of empathy.  But, the true highlight for me was learning about Paul Clifton’s work with his ELA students on The Voice of Montbello podcast.  These kids are in middle school, folks….He brought two 7th graders with him to the conference and they were fantastic!

I don’t know about you, but middle school was hard enough. I definitely would not have had the confidence to write scripts for a podcast and deliver them, let alone interview Denver’s Chief of Police about topics like deportation and DACA–in my second language.  Mr. Clifton is doing incredible, culturally sustaining, and affirming work AND amplifying student voices.  His classroom is a “Makerspace” where students develop language skills in English by creating something for the real world that produces actual social change and boosts awareness through students using their voices to speak truth to power.  Let me be very clear: this is what ALL 21st Century education should look like.

Whenever I go into another educational ecosystem that is not my own, I try to navigate that space between speaking my truth and listening and learning to that of those who’ve invited me to come co-create, learn, and explore.  My experience at Anastasis left me rich with ideas to take back to my school, and had me feeling so buoyed up with hope that the courageous and progressive educational moves they are making will catch fire in other places.

At the same time, I felt very sad that due to the way our system is structured, in our state, there are still only pockets of greatness serving specific communities.  As a whole, our school systems remain static, and unmoving in our policies and practices when it comes to the imaginative thinking it will take to produce widespread change.  It might be hard to believe, but McGlone Academy, where Mr. Clifton teaches, and my school are 2 minutes away from one another–yet just as I had no idea about the great work he and his students are doing, he also had no idea about me, or my work.

To take it one step further, parents and students at Anastasis do not have real first-hand knowledge of what is going on in Montbello, across town.

I had no first-hand knowledge of what was happening at Anastasis until I was invited there to be a part of the conference.

How can we consistently provide equitable high-quality education for students that is culturally relevant, academically challenging, and applicable to real-world scenarios if we don’t even know what is going on from one end of the city to the other?

How can we expect our students to take on the responsibility of repairing the mess we’ve made, and creating a better world, if they go to school in silos with people who look, think, and act just like them, oblivious to the kids on the other side of town who are getting a mis-education?

In order to really produce widespread systemic change, charter and private schools in white-dominated neighborhoods are going to have to invite people of color into their spaces as Michelle invited me into hers–and help us to feel at home once we get there–which they did.  Doing this will make some people very uncomfortable.  During my panels and workshops I did bring up conversations about privilege and white supremacy, and some people did get uncomfortable.  But, I ask how serious are you about change if you only want it when it’s easy and feels comfortable for you?  Overall, the folks at Anastasis showed me they were willing to get into the weeds with me by not censoring or policing me, my workshop content, or interactions with their staff.  Most people responded favorable to the call to expand thinking/ consciousness.

Still, there were some who were not ready for the shift in thinking.  In order for us to see widespread change, we may not need everybody to wake up at the same time, but we need more people from these communities to go to the schools that are stigmatized and marginalized, or written off as lost causes, to seek healing through forming relationships, listening, and learning about the good work going on within those walls.  Seeing some of the disfunction–the lack of resources, to name one, will make them uncomfortable–as it should.  Nobody should be comfortable with or accept some of the things I’ve seen going on in urban education.

Our school system is racially and economically segregated more severely now than ever before.  This will not change by ignoring or remaining oblivious to the problem.  We will never be strong if we remain divided and isolated in our cultural, ethnic, and thought silos.  Nothing is stopping folks from traveling to the other side of town to listen, ask questions, seek solutions.

The alternative, if we can’t learn to make the divide between our parallel worlds more porous, is that lots of people of color who are now saying, “Thank you for your service–we got it from here,” will start doing more than just talking.