When Snapchat first came out, I had an account.  Generally, when deciding whether to put myself out there on social media, I look for an app that gives me a level of connection, without the threat of exposing myself too much to any of the more negative aspects of social media I have encountered.  Snapchat seemed cool at first, then I heard stories about privacy invasion, I couldn’t figure out all the tools for manipulating photos and videos (or why anyone would want to), and I didn’t understand how to chat with people when the messages seemed to just disappear.  Add to that the fact that it had filters that lightened people’s skin tones to make them more “beautiful”, and I was out [even though other apps do this too].  The whole love affair lasted about 3 months, ended abruptly, and I moved on and never looked back–until today.

This Spring, AP Lang students are reading The Poet X and Electric Arches, while working on a dope ethnography project that encompasses rhetorical analysis, argument, and synthesis reading and writing.  If you know me at all, you know that these are the books I have been waiting for my whole life, and not just because they have girls that look similar to me on the cover.  With both texts, from the very first page, I knew that they were books my students and I needed to experience in the classroom. 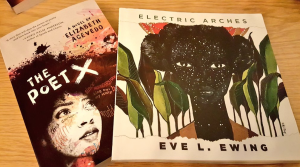 There are so many reasons why, and I will dedicate an entire blog post to it when we finish the unit.  For now, here’s an overview:

More on that soon…

I’ve noticed that when adults decide to adopt a social media platform, it’s not long before the kids abandon it for somewhere else–where they can feel free and unwatched.

My view of the social media evolutionary timeline so far:

As such, though I’ve dabbled in them all, I go where I feel most comfortable and can best rationalize the time spent scrolling as productive.  These days it’s Twitter, because Facebook and Instagram became toxic for me for reasons I won’t go into here. But I digress.  Usually, when students ask me to add them on Snapchat, my answer has historically been, “No, baby.  I don’t Snap.”  I respect their need to have their space.  My daughter, like every other teenager I know, uses Snapchat all day every day.  I don’t have a need to get on there and “befriend” her so I can get into her business.  That is not how I parent.  As an educator, it has been interesting to see this new generation of digital natives use the various platforms for a variety of purposes.  I do believe that if you work with teenagers, you have to at least know HOW to be in their space and in their world, even if you don’t choose to go there on a regular basis.

The lesson for students was to make some Book Snaps of The Poet X.

The lesson for ME was in vulnerability, and sharing power.

The students taught me how to use Snapchat today….and it was soooo uncomfortable.  I am not exaggerating in any way when I say that at several points today, I felt helpless.

Since most of my readers are educators, let me break this down for you in a relatable way.

I downloaded the app and installed it, but then couldn’t get it to sync with my Bitmoji account.  I encountered a weird anti-robot verification screen that kept asking me to identify things like stop lights and cars in photos.  One of my students noticed my distress and said, “Miss–are you a robot?”  I said, “No”.  He said, “Then you shouldn’t have any problem.”

This snarky comment is exactly the type of thing I  know I have said to students many times when they are fumbling around with some tech 2.0 tool or trying to circumvent the school’s very arbitrary Internet firewalls.  It’s not helpful.

Script we tell students: “This app/website/tech tool is so easy to use.  Anybody can do it.”

My lesson: Sometimes navigating technology isn’t as smooth as it seems, and individual experiences with the same technology can and do vary.  Have patience, and persistence.  Don’t be a smart ass when somebody is struggling.

Step two: Learn how to use the App

I literally had to be taught the most basic parts of Snapchat, things like taking a picture, making stickers [which I found out they do of us ALL the time without us knowing.  It’s okay, they do it to each other too], and adding/changing the colors of text.  I learned that there is a character limit to what you can type in a text box, and that if you use too many images, it looks like you just found out how to use stickers–which makes you look desperate and uncool.

I can tell you what went down, but it’s a crazy and wonderful thing to admit what I FELT while all this was happening.  I felt bad that I had to keep asking for help with various features.  I felt like I was the opposite of smart, because some parts of navigating the app weren’t intuitive (at least not to me).  I felt embarrassed that I didn’t know even one quarter the amount of what they do about how to use this app.  Shouts to Imaan, Sammy D, Cristal, and Irving for helping their teach out, being loving and patient with me, and taking me under their wings.

Script we tell students: “I already told you the instructions, you just need to follow them.”

My Lesson: Have patience when people ask questions, need to be shown the same thing multiple times, or take a little while to master a skill or understanding.  Sometimes instructions aren’t enough, and some people learn best by being shown, or given an example.  Be understanding when people act like they want to give up, or get discouraged by seeing people around them mastering skills really quickly.

With surprisingly little fuss, students made the Booksnaps, uploaded them to the Padlet that was in Schoology, and were ready to play Kahoot to practice vocab (our culminating activity) in less than an hour.  A few people throughout the day came to me asking for validation that their work was good.  This is normal.  It was refreshing to say, “We’re all learning together here and I’m sure whatever you’re doing is better than the mess I’m making over here.”

But…not so normal for me.  I’m pretty independent, have worked hard to develop mastery in my content, and I’m not usually one for seeking approval or validation from folks.

So, this activity was a little confidence shake up for me!  A few kids who aren’t on Snapchat were also struggling a bit. Even so, as digital natives, they grasped it pretty quickly, and when I saw how THEIR Book Snaps looked, I felt like MINE was pretty basic…I still feel like it is.

Script we tell students: “Be confident!  That’s really all you need to get you through.” “To get an A, you need to be doing above grade-level work, consistently.”

My Lesson: Sometimes you don’t know what you don’t know, until somebody shows you.  Then you have to deal with all the feelings of self-doubt that show up when comparing your work to others, and it takes a bravery to push through.  Students naturally compare their work to that of their peers, and that of mentor texts we place in front of them.  It’s tough to feel like your best just isn’t as good as THE best.  It’s not easy to accept that usually, excellence and mastery in anything comes with practice–which just takes time.  If someone comes to me wanting validation for their best work, they deserve to be reassured that their best is exactly what I’m hoping for, and to be reminded that the road to mastery is often long, hard, full of potholes, and rarely straight uphill. 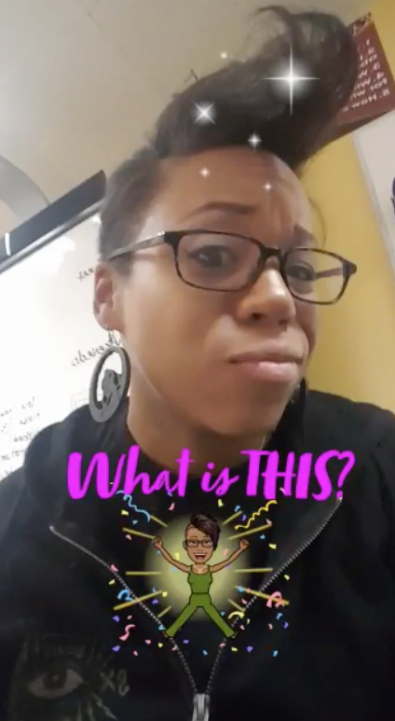 Also, check out this Twitter Moment for a more serious meditation on the importance of flipping the script from time to time and occupying that space where one sees and feels how much our students can really teach US (if we let them).

2 thoughts on “On Vulnerability (and Snapchat)”